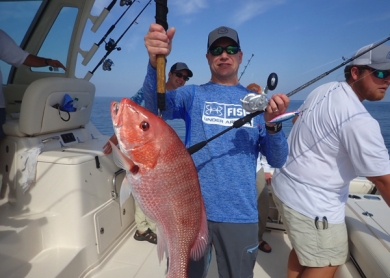 Here is Bill the rod builder in USA. 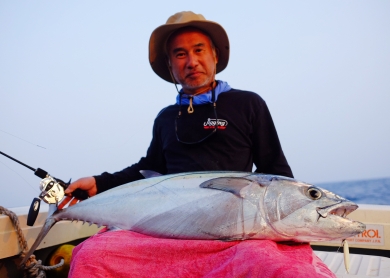 We went out on Murubushi 3-day island stay trip with a group of jiggers from Hong Kong and USA. First, we went to Payao, underwater buoys wired down to the ocean floor over 1000-meter deep.  Only 20 minutes from Aguni Island.  Tried casting and jigging for tunas and other pelagic fish, but nothing much.  We only caught small tuna and Katsuo.  The current was running like a river.   It’s the ending of winter tide and beginning of summer tide now.  We don’t know if that is the reason but the tide was really funny.  The current was so strong everywhere and almost all the time, sometimes stirred up in some places and running to weird direction.  The captain had hard time staying vertical and controlling the drifts to hit hot spots. But these jiggers were very skilled and enthusiastic.  In spite of the tough condition, they kept jigging and started picking up nice fish.   And BOOOM! A big bite in one of the last drifts of the day. He was pretty quick to land this 20kg class dogtooth tuna.  The new ocea jigger did a good job. Look at this tiny jig! Well, the jig can be tiny but the hook he was using was so tiny that it couldn’t penetrate. One hook had only the hook point varied in the upper lip.  But it was hooked in a great place, avoiding the teeth too. He had a … 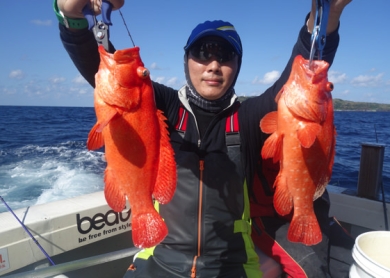 We had a 3-day island stay trip to Aguni on Murubushi with Macao anglers. We wanted to catch bait fish and try Oyogase, but the weather didn’t allow us.  We had to stay behind the island and try our best with bottom fishing and jigging.  But we did well.  We didn’t get the size but we caught some nice fish.     Great job you guys!  See you again in June!